IPMS Toronto President Harvey Low gave a fantastic presentation at the January club meeting regarding his efforts to build an accurate representation of a Mustang flown by one of Canada’s military heros.

Please join us for our virtual ZOOM IPMS Toronto meeting on Nov. 2 at 7pm. We will be joined by guests from IPMS Canada along with club reps from across Canada and the USA. I hope you can join us! Meeting link will be supplied shortly.

As you are no doubt aware, 2014 is the 50th year of IPMS Canada. To celebrate, they will be sending all of their members a special free decal sheet in an upcoming issue of their publication, RT. This large (ca. 8″ x 12″) sheet contains Canadian content aircraft markings in 1/48 and 1/72; and vehicle markings in 1/35 and 1/48. The aircraft include a WW I “Victory Bond” drive Curtiss JN-4; a Hurricane flown by John Kent (aka Johnny Kentowski); a Spitfire XVI in some interesting late-war markings as flown by Stan Turner; a DH Vampire of 402 (City of Winnipeg) Squadron; and a Sabre from 441 Squadron with special ‘rat’ markings! The vehicle decals include a Centurion, two Shermans, and a colourful Jeep!

All IPMS Canada members current at the time of mailing will receive these decals.

After this anniversary present is sent out there will be no extras available for sale or to members joining or renewing later.  So… if you are interested in this decal sheet, all you have to do is to join IPMS Canada. Visit our website for more info, or to join: www.ipmscanada.com 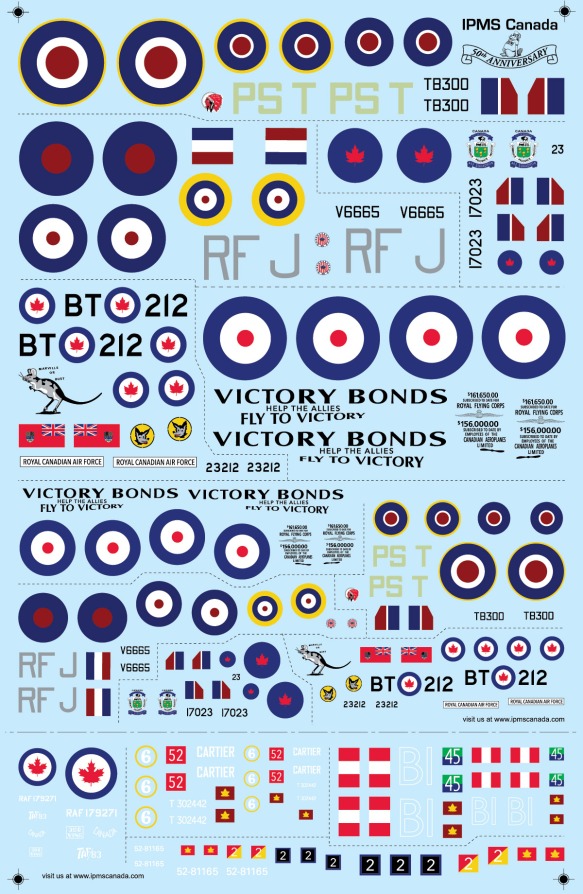