Our fellow US modelling brothers, Christopher Mrosko and Brett W. Avants started a new military modelling association in 2018, called the MILITARY VEHICLE MODELLING ASSOCIATION. This brand new organisation is growing and now has 50 chapters world wide as of September 2018. We here in Toronto became the 10th Battalion Chapter with our unique logo sporting a Canadian Ram Tank.

This new organisation is supporting the Military Vehicle Preservation Association (MVPA) with the dues raised to go towards the restoration of military vehicles at MVPA. The plan is to have an MVMA national show in conjunction with the MVPA national convention every year in Pennsylvania. Thus this is a unique partnership between folks that own and restore real military vehicles and those that build scale models of them.

The Toronto Chapter of the MVMA will be a “virtual club” (no physical meetings – at least not unless someone volunteers space). It will be virtual web-hosted off the IPMS Toronto page. Membership will be separate from IPMS Toronto and AMPS Fort York Toronto.

I encourage modellers to consider joining and supporting the MVMA cause on their own accord. Download the brochure and membership application form and remit payment as per the instructions on the forms. All members will receive a unique MVMA Challenge Coin, a membership certificate, and an annual 130+ page MVMA Publication.

Check out MVMA on Facebook by following this link. 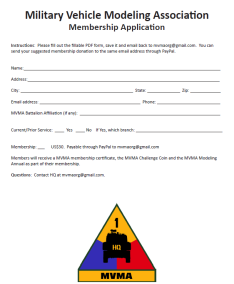