Hailing from our sister club in Warsaw, Poland, please enjoy these awe-inspiring photos of the paper models of Szukiel Bernard.

“My name is Szukiel Bernard, and I met Robert from IPMS Toronto on the Model Show and Contest in Warsaw as he approached my Star Wars models. I first become accustomed with Star Wars within the movie theaters during the early 1980’s, and this was love at first sight for me. Ever since my first movie, I have developed and held a fascination about the franchise, and this prompted me to collect various building materials from all around the globe, something that I still do to this very day. I am full of admiration for both people working on such models and those dealing with special effects, as in my opinion it is the latter that gave the franchise its great success. My dream is to see such life-sized models that they use in the filming studios. Within these past couple of years, I have been collecting various photographs of the Millennium Falcon, of which I wish to construct a model of. Building this ship is not easy, but what is even more challenging is the planning phase on how to build something from just photographs, as this will be my very first time building a model this way. I would say that approximately 99% of my model is constructed from cardboard of various dimensions and different kinds of wires. Illumination of the ship was possible by incorporating LED diodes. The beginning of the project consisted of planning the size and perfecting dimensions, followed by cutting out and gluing together small individual fragments, that then at the end of the project would become painted as they were incorporated into the entire ship. The model took approximately four years to build, with a bunch of breaks in between. In the beginning, my model did not look like the finished product at all, but only when I started constructing specific fragments of the ship, did it begin to look like the Millennium Falcon, and at that point I knew I would enjoy working on this project. My interests in the Millennium Falcon surpassed my expectations and I did not expect to receive that many opinions and positive feedback from other artists, which in the end only motivated me to build further vehicles. One such model following my Millennium Falcon was the AT-AT walker, which I decided to want to construct in three different poses. This quickly turned out to be a bigger challenge than my Millennium Falcon, however I was fortunate to be able to find more time in my day to work on the models, and for that reason I was able to accomplish my goal in less than six months. When I attended a model show in Poznan, I displayed my models and received much recognition, which really motivated me to continue this line of work. I am in the middle of my next project now, which consists of constructing an X-Wing and I spend every available time on this model. Finally I would like to bless Canada and all Star Wars fans from around the world.”

Click on the photo below to view a gallery of his work. 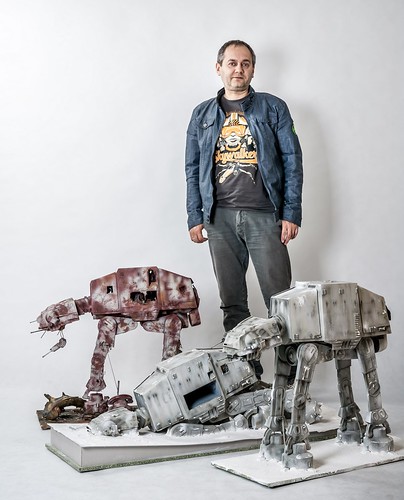